I found the most brilliant idea on Pinterest!!! I was so excited when I saw it (and still kinda am....). It's from Better Homes and Gardens (aka the organization gods) and it looks like this: 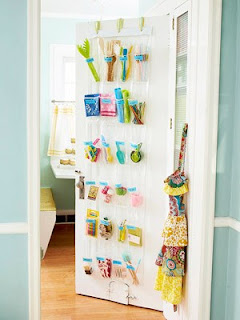 A shoe organizer made into a kitchen stuff holder! I just about died at this brilliant idea, because I have been trying to figure out a way to organize one of my drawers in the kitchen. We don't have a lot of drawer or cabinet space in our house. We have two drawers to be exact, one we use for utensils, the other we use for the rest of everything. It's pretty annoying to have to almost squish your hand to get the drawer to close! And I thought about giving stuff away that we don't use, but I would love to use the stuff that we don't use if we ever had people over, so I didn't want to give it away and then need it later on when we entertain more often! But this is what I'm talking about with our drawer: 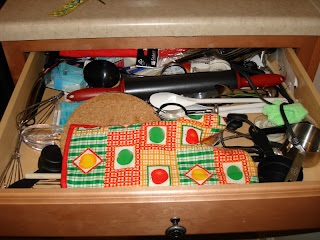 We even outgrew that and had this ugly thing taking up valuable cabinet space below! 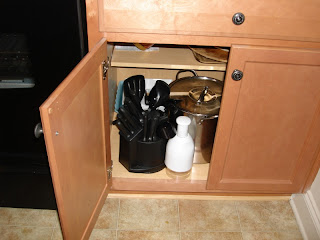 So once I saw this shoe organizer idea, I was like "hey! I need to go to Wal-Mart, wanna come?" Once I got back home with my $5.77 piece of heaven, I put it up on the closet door with the hooks it comes with.  Here's how it looked before the stuff was in it: 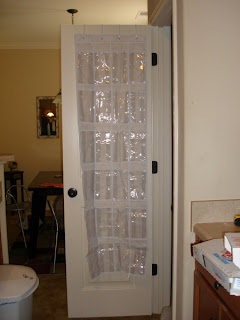 And here it is once I put everything in there that would fit and that I didn't need to get to quickly: 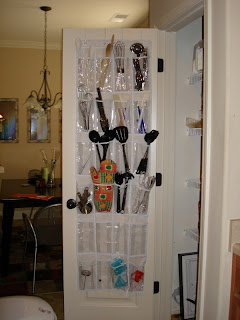 I didn't use all the pockets, so that leaves room for more stuff (and who doesn't love buying new, cute kitchen utensils?? Oh...am I the only one....well this is awkward....) ;)
I also put some velcro dots on the back of the organizer to keep it from swinging all over the place (which it did before I velcroed it) I only put two (one on each side towards the bottom half of the organizer) and it's holding great! 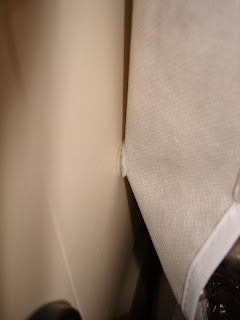 My only issue with it so far is the gross door hooks it uses: 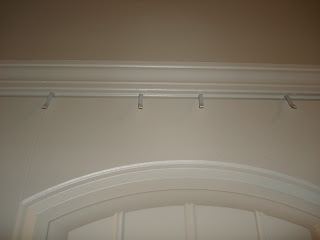 Okay, they aren't gross but I don't really like them...like at all. Better Homes and Gardens had the idea of putting screws in the top of your door and then tying ribbon around them to hang the shoe organizer, but so far the hubs hasn't gone for that idea....but I'm working on him ;)
Anywho, this is what that super cheap idea did to my icky drawer: 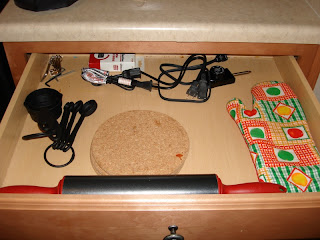 Made it organized!! YAY! I just kept the trivets and oven mitt in the drawer because I usually need to get to those quickly (as my oven is beeping at me and I'm trying not to burn whatever I'm attempting to cook). The measuring cups I kept in the drawer because I thought it would be difficult to see which sizes I needed in a pocket, even if they are clear. And the rolling pin just didn't fit. As for the random wires, metal key thingies, and garage door opener...I have no idea what to do with those so until I figure that out, they'll stay in the back, out of the way!

Oh! And I took out everything out of this cutlery holder and put most of it in the shoe/kitchen organizer and I put the knives in our utensil drawer.So now I can give this thing away! Yay! More cabinet room! 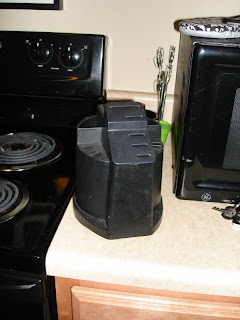 The only thing left for me to do is find some cute labels and put a label where everything should go (in case I'm not the one putting up dishes or I don't do dishes for like a month and all the things that are supposed to be in the pockets to tell me where to put their friends aren't there...not that that would ever happen) ;)
So what do you guys think? Have you done any organizing in the name of I-almost-squished-my-hand-trying-to-get-that-drawer-closed?
Posted by Crystal at 4:32 PM